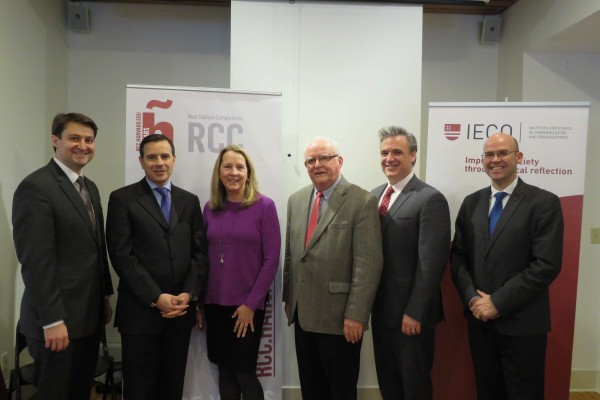 The fourth edition of the IECO-RCC International Colloquium was held on April 4th. The Colloquium gathered thirty scholars and practitioners from Boston, New York and Washington, who engaged in a lively discussion on the dignity and meaningfulness of professional work. This series of colloquia is an initiative of Manuel Guillén, IECO’s founder and director, who has recently been appointed Valencia University representative at the Real Colegio Complutense at Harvard.

The topic of the 4th Edition of the International Colloquium IECO-RCC has been meaningfulness of work as a calling for personal growth through service to others. The speakers underlined that the meaning of work should not be searched in the way work is performed (i.e. the realm of knowledge and experience), nor in the results or benefits it produces, but rather in the reasons that move people to carry out that work.

The moderator of the Colloquium was William English, research fellow of the Edmond J. Safra Center for Ethics, from Harvard University. The speakers were Frank Daly, CBE Executive Fellow – Bentley University, who has more than 20 years of experience as Ethics and Compliance Officer in the American aerospace industry; Michael G. Pratt, professor at the Carroll School of Management at Boston College; Donna Hicks, professor of the Weatherhead Center for International Affairs at Harvard University, and Santiago Martínez, researcher at IECO institute, Valencia University, and lecturer of Business Ethics in Business Schools in Finland, Spain and Kenya.

In his introduction address, William English described the historical evolution of the meaning of work from having a negative connotation – according to which work belonged to servants and slaves – to the importance it has today, when work is considered as part of personal development. William English challenged the participants with some questions about meaningfulness at work that the speakers answered during their respective speeches.

Michael Pratt clarified the difference between meaning and meaningfulness of work. Referring to his recent research among firefighters, he explained how people who are able to give meaningfulness to their work are more likely to gain other people’s trust. These qualitative studies show that aspects like commitment, job satisfaction and trust in employees have a bigger impact in the significance of work than other factors like salary or other material benefits.

During her address, Donna Hicks illustrated the strong relationship between meaningfulness at work and the respect for human dignity. Using her experience with NGO’s that work with the latino communities in the United States as an example, professor Hicks described how people who feel their dignity injured are the ones who lose the sense of meaningfulness at work most easily. Donna Hicks referred to those who feel treated unfairly, and see their safety threatened or lose the sense of identity with their communities.

Finally IECO researcher Santiago Martínez emphasized the importance of love at work. Starting from the idea that work starts from love, is a manifestation of love and is directed toward love, Santiago Martínez emphasized the need of a trustworthy environment as a condition for work to be dignified, and as a requirement to find the intrinsic value every particular task has. Only in these conditions work can become worth of being loved by the people involved. It is then when people can find the motivation to pursue excellence at work, what adds enthusiasm to the search for personal flourishing. Eventually, and since in its deepest meaning love consists in contributing to the good of others, love at work means that one achieves personal growth when he or she decides to work for the service of others.

The Colloquium will be available in the YouTube channel of Harvard University and in the webpage of the Real Colegio Complutense within soon.